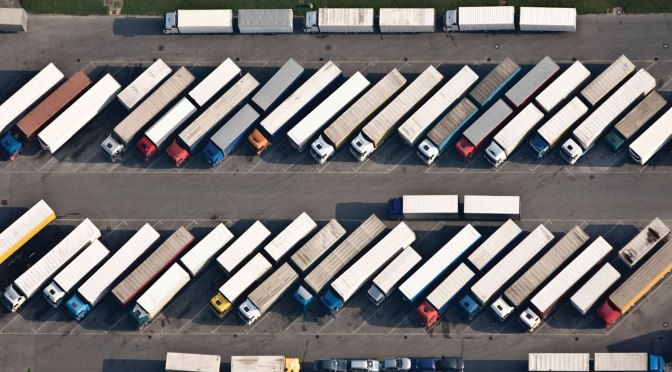 With freight traffic increasing on U.S. roadways, commercial truck drivers often struggle to find safe and legal places to park. If parking spaces are not available at a nearby rest area or truck stop, drivers may be forced to pull over in unsafe locations or continue driving and become dangerously fatigued. Drivers may also risk violating federal hours-of-service rules, which require them to rest after 11 hours of driving.

In response to this issue, a team from MnDOT, the University of Minnesota, and the American Transportation Research Institute  is developing a system that can identify available truck parking spaces and communicate the information to drivers—helping them determine when and where to stop. System benefits include improved safety, reduced driver fatigue, and better trip management.

The system uses a network of digital cameras suspended above a parking area to monitor space availability. Image processing software developed by researchers at the U of M’s computer science and engineering department analyzes the video frames and determines the number of available spaces.

As part of a demonstration project funded by MnDOT and the Federal Highway Administration, the project team is installing the system at three MnDOT rest areas and one private truck stop on I-94 west and northwest of the Twin Cities.

The U of M research team first installed the system in late 2012 at the the Elm Creek Rest Area, two miles north of Interstate 494 on I-94. As of early 2014, the system has been installed at an additional rest area, and a third site is in progress.

Next steps for the project include implementing several mechanisms that will communicate parking information to truck drivers. First, the team plans to install variable message signs along I-94 this spring. Also in the works are an in-cab messaging system and a website.

Overall results of the demonstration project will help the team determine whether this technology holds promise for use in other corridors throughout the nation.

Read the full article in the February issue of Catalyst.

Minnesotans have grown accustomed to roundabouts as they’ve proliferated throughout the state, but many motorists are still confused by the less common two-lane roundabout.

While roundabouts have been shown to reduce vehicle delay and severe crashes, the few Minnesota cities with this type of multi-lane roundabout have had a prevalence of driver mistakes.

In Woodbury, two such roundabouts were converted into smaller, one-circulating-lane designs due to driver confusion.

The City of Richfield had no such option at the high-volume Portland Avenue and 66th Street, a formerly signalized intersection that carries about 30,000 vehicles per day. (See video)

Crash-prone and congested prior to its reconstruction in 2008, a two-lane roundabout seemed to be the practical solution for this intersection. But although the roundabout reduced overall crashes, the intersection still had more fender benders than designers were comfortable with, according to City Engineer Kristin Asher.

“The crashes were primarily related to improper left-turns from the outside lane and failure to yield at the entry,” she said.

Not only were drivers unsure which lanes they should use to enter or exit the roundabout, they didn’t know how to respond to other cars inside the roundabout. (See news story)

“People don’t understand they have to yield to both lanes inside the roundabout,” explained University of Minnesota researcher John Hourdos.

In a recently completed study funded by the Minnesota Local Road Research Board, researchers from the Minnesota Traffic Observatory examined whether sign and pavement marking changes would improve performance.

The city of Richfield extended the solid lines leading up to the intersection from 50 to 250 feet to encourage drivers to choose the correct lane before entering the roundabout. It also replaced fish-hook-style roundabout signs with traditional lane designation signs and did away with complex striping patterns.

Hourdos examined two years of traffic data to see how motorists responded to the improvements that were made in 2011.

He found 50 percent more drivers entered the correct lane from the get-go, which led to a reduction in improper turns within the roundabout. Lane violations were also reduced by 20 percent.

“One of the main problems was drivers didn’t know they have to choose one of the two lanes,” Hourdos explained. “Then once they were inside the roundabout, they were forced to either deviate from their course or commit a violation.”

The city also increased sign visibility to address yielding problems; however, these changes didn’t seem to make a difference.

With state and federal guidelines lacking much guidance for how to sign two-lane roundabouts, the LRRB is funding a new study for three other multi-lane roundabouts: in St. Cloud, at Highway 169/494 and one planned for the future realignment of County Roads 101 and 61 between Chanhassen and Shakopee.

Report: Effect of Signing and Lane Markings on the Safety of a Two-Lane Roundabout (PDF, 4 MB, 72 pages) 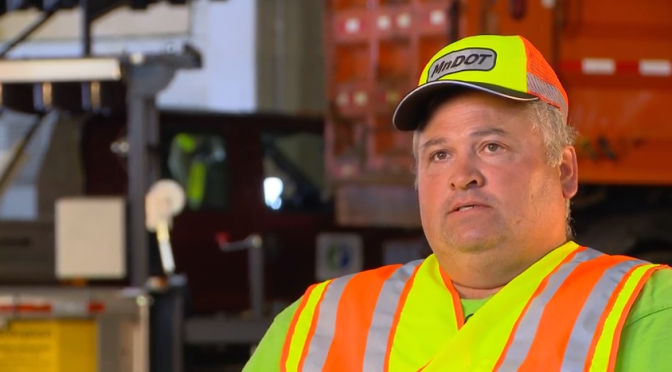 The Minnesota Local Road Research Board is a major source of funding for transportation research in the state. Occasionally, it also produces educational videos designed to raise public awareness of important transportation topics.

Two new video offerings from the LRRB (embedded above and below) are focused on save driving in work zones. While not directly research-related, they might prove a useful resource to transportation professionals. More importantly, they serve to remind us all of the very real and dramatic consequences of work zone crashes, of which there are approximately 2,000 per year in Minnesota.

You might want to also check out some of their other recent YouTube offerings, including explanations of why we need stop signs and speed limits, as well as a fascinating look at how potholes are patched. 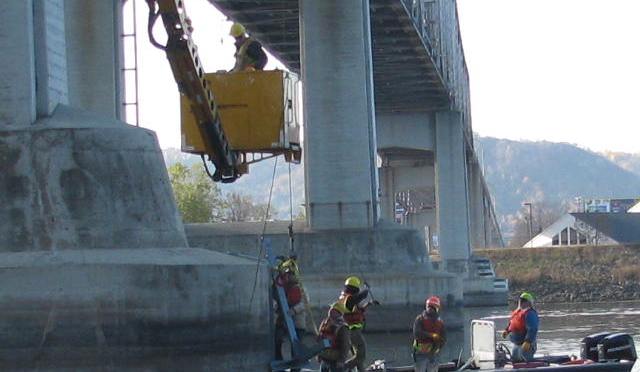 A research implementation project could provide MnDOT with a new set of tools to help combat a major source of bridge failure.

The MnDOT Bridge Office is testing several new methods of monitoring bridge scour — erosion that occurs around bridge piers and abutments during high water-flow events like floods. Acting Waterway Engineer Nicole Danielson-Bartelt said the project’s goal is to be able to monitor scour-critical bridges remotely rather than sending maintenance personnel out on the water during difficult or hazardous conditions.

“There are a number of bridges that are pretty difficult to monitor, especially during high water events,” she said. “Typically, you need to get out on a boat and do either sonar readings or drop weights. It’s dangerous work to be out on the water during those types of events unless you have the right training.”

The project will evaluate several different monitoring technologies, including continuous monitoring equipment like tilt meters and active sonar. The sonar systems, which allows continuous stream bed and water surface elevation data to be transmitted to a website for graphical display, could provide benefits that go beyond monitoring individual bridges.

Other devices being tested include “float-out” devices, which are buried in the sand around the abutment and send out a signal only if washed to the surface by a scour. Danielson-Bartelt said these non-continuous monitoring devices might be appropriate for bridges where installing permanent sonar is not advisable due to the presence of debris that could damage the equipment.

Monitoring equipment has been installed at two locations: the Highway 43 Winona bridge over the Mississippi River and the Highway 14 Mankato bridge over the Minnesota River. A final report on the project is expected in late 2014/early 2015. You can learn more about some of the products that are being tested on the website of ETI Instrument Systems, Inc., which provided the equipment. 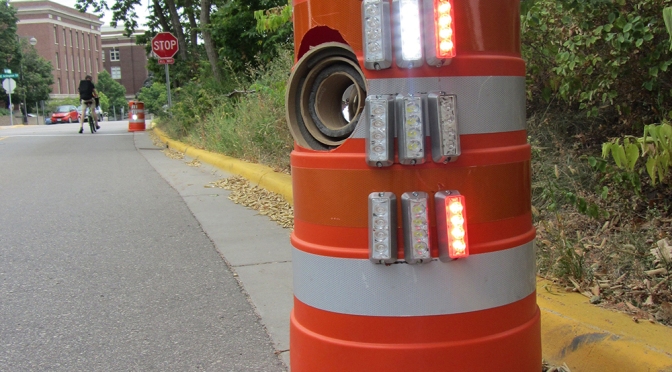 Work-zone safety is a serious, ongoing challenge for transportation agencies. According to MnDOT, the current three-year average for Minnesota work zones is 1,819 crashes and seven fatalities per year. And that’s not counting near-misses: just talk to anyone who has worked as a flagger, and they will likely have a story about diving into a ditch to avoid being hit by a distracted driver. Consequently, MnDOT is constantly exploring ways to make work zones safer — which brings me to the photo above.

What you’re looking at is no ordinary traffic cone. It’s a prototype of a new warning device called the Intelligent Drum Line system — basically a modified orange traffic drum packed with electronics that can detect speeding drivers and blast them with audiovisual cues to let them know they’re entering the work zone too fast.

Our new technical summary explains the details of the new system, which was developed at the University of Minnesota, with funding and in-kind assistance from MnDOT:

The prototype design uses two modified traffic drums placed 1 to 3 feet from the shoulder of the road and 300 to 400 feet apart. Sensors in the first drum detect vehicles, measure their speed and distance, and communicate this information to the second drum…

Testing of the IDL system at MnROAD has been successful; however, researchers still need to study how drivers react to the system in real-world conditions. Before they can do that, the design will have to be refined so that it can pass Federal Highway Administration crashworthiness tests. On a related note, MnDOT is currently funding a separate University of Minnesota study into which technologies are most effective at capturing drivers’ attention in work zones. The study will include visual and auditory cues similar to the ones used in the IDL prototype.

One of my unofficial duties as a MnDOT employee is to respond to a near-constant barrage of opinions from my family and friends regarding the condition of our state’s roadways. (My wife, for example, half-jokingly tries to ascribe personal responsibility to me for the congestion she faces on her morning commute.) Interestingly, one of the issues that gets brought up to me most often in private conversations is roundabouts — the circular intersections that are widely praised by engineers but often vilified by a skeptical public.

From a public interest perspective, the verdict on roundabouts is overwhelmingly positive. With very few exceptions, roundabouts have been shown to dramatically reduce both the frequency and seriousness of traffic accidents when compared to other types of intersections. One oft-cited source, the National Insurance Institute for Highway Safety, reports that U.S. intersections converted to roundabouts have experienced a 35-47 percent decrease in crashes and an 72-80 percent decrease in injury crashes (source here). Moreover, because the don’t have stop signs or traffic lights, roundabouts have been found to reduce traffic delays and pollution.

Perhaps not surprisingly, research on these potential benefits has precipitated a rash of roundabout construction. In Minnesota alone, 115 have already been built, with another 39 either planned or under construction, according to the Pioneer Press. Love them or hate them, roundabouts are becoming a fact of life here.

Of course, not everyone loves them. In spite of their stellar  record, roundabouts remain something of a political lightning rod. This article in the Mankato Free Press and this news segment from KSTP provide typical examples of the kind of skepticism officials face when proposing to put in a roundabout. The problem is persistent enough that many officials see a need to develop a public relations game plan. On June 19, the Transportation Research Board is offering a free webinar entitled “Community Outreach: Successful Outcomes for Roundabout Implementation,” designed to help transportation professionals understand and respond to political opposition to roundabouts. It’s free for employees of TRB sponsor organizations (including MnDOT); a $99 registration fee is required for employees of non-sponsors.

For those who are unfamiliar with roundabouts, there are some good resources designed to help people understand their purpose and benefits. Several years ago, the Local Road Research Board produced the video above (along with an accompanying brochure). MnDOT also has a resource page devoted to explaining the use of roundabouts.

Those with more than a passing interest in the subject might also want to check out these recent MnDOT/LRRB-sponsored studies: