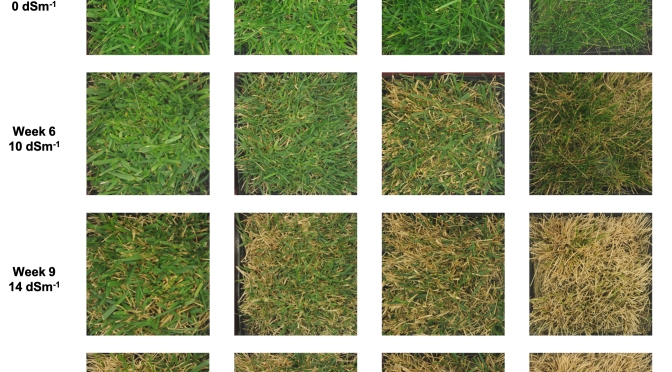 A recently completed research study has identified turfgrass species and cultivars that perform best under the heat and salt on Minnesota roadsides.

Varieties from fifteen turfgrass species were tested in salt, heat and ice stress protocols. Analysis of color and cell membrane stability yielded recommendations for salt- and heat-resistant turfgrasses, but was inconclusive for ice-resistant cultivars. A mixture of cultivars was recommended for field study.

In addition to year-round contaminants generated from highway traffic, Minnesota roadside grasses face snow, ice and salt from deicing operations in winter, and heat in summer that is even hotter alongside roadways and in urban environments.

Various turfgrass species may offer better resistance to specific stressors. Several current and recent MnDOT studies have evaluated salt tolerance and watering needs for select species of turfgrass. It was unclear, however, which species performed best under the multiple, combined stressors of Minnesota roadway environments, and would suit a mixture tailored to one of three Minnesota climate regions that could optimize turfgrass performance throughout the year.

This project sought to identify turfgrass species and cultivars that perform well under the range of stressors common to Minnesota roadsides. Successful cultivars may be candidates for turfgrass mixtures of multiple species that would optimize performance under all conditions in the field.

Researchers conducted a literature search to identify promising turfgrass species for harsh environments. Then they contacted seed companies for further recommendations before requesting seeds for multiple cultivars from 15 species. Next, researchers tested cultivars in salt, heat and ice stress protocols. Results from this testing are summarized below.

Heat Stress. Investigators grew eight samples each of 34 cultivars in 4-inch pots in a greenhouse for 12 weeks. Plants were trimmed manually to 2 inches. Half the plants were put through three heat stress cycles of 49 days of 95 degrees Fahrenheit and 70 percent humidity, followed by 28 days of normal conditions. Researchers then conducted digital imaging, in-pot color indexing and electrolyte leakage testing.

Ice Stress. After 10 weeks in a greenhouse, four samples each of 35 cultivars were placed in cold acclimation for 14 days at 35.6 degrees Fahrenheit. Investigators then moved pots to a chamber held at 28.4 degrees for 24 hours to freeze the soil, and then applied 2-inch layers of ice to each pot. A sample of each cultivar was removed at four, eight, 12 and 16 weeks, thawed for 48 hours in a 35.6 degree chamber and then moved to a greenhouse. Digital images were taken at 31 days in a greenhouse. A second batch was run as a control through the same trial up to the point of ice cover to identify if cold temperature was fatal to any samples.

A mixture of turfgrass varieties and species will likely be the best solution for year-round use in Minnesota, as no one cultivar performed well in every trial.

Salt Stress. Tall fescue and perennial ryegrass sustained the highest percent green cover and lowest electrolyte leakage throughout the salt stress trials. Alkaligrass, considered salt tolerant, did not perform significantly better than other grasses. Only tall fescue emerged as a salt-resistant turfgrass option, though this cultivar is vulnerable to ice cover.

The second phase of this study began in 2018 and employs a mixture of six species selected from this study: Kentucky bluegrass, slender creeping red fescue, hard fescue, buffalograss, alkaligrass and tall fescue. Mixtures will be planted in different combinations on roadsides for evaluation. MnDOT will also adjust its seed mixture recommendations for use in the meantime based on the results of this and other studies. Ultimately, MnDOT intends to develop recommendations tailored to three climate regions in Minnesota.