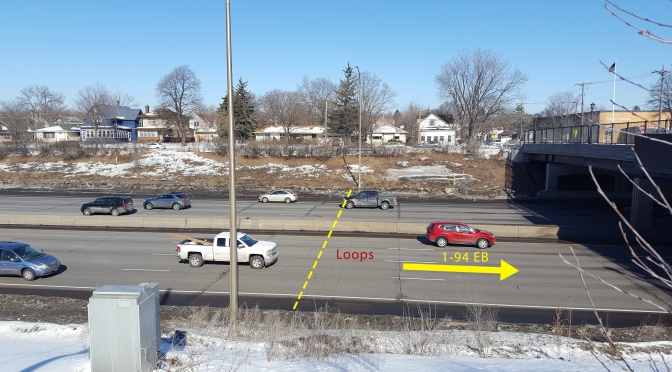 Researchers evaluated the use of existing inductive loop installations in Minnesota for vehicle classification. Results showed that inductive loops may be effective at identifying and classifying individual vehicles as they pass, but the system will require further refining for Minnesota use.

MnDOT periodically counts vehicles on state highways and uses this data to plan for transportation infrastructure needs, apply for federal funding, anticipate traffic demand and potential congestion, and learn how drivers use the highway system.

Automatic traffic recorders (ATRs) and weigh-in-motion stations count and measure the size of commercial vehicles. Engineers also count total traffic, classifying vehicles by size or axle number according to the Federal Highway Administration’s (FHWA’s) system of 13 vehicle classes, which includes Class 2 for passenger cars; Class 3 for pickup trucks, some SUVs and minivans; Class 4 for buses; and Class 5 through 13 for commercial vehicles.

Vehicle classification counting usually entails manual counting or the use of pneumatic tubes stretched across vehicle lanes to record speed and the number of axles passing. Tube counts are conducted for 48 hours at each of 1,200 sites throughout the Minnesota highway system once every two years. This time-consuming, costly practice also places staff in danger. Video imagery can be used, but this also takes a considerable commitment of labor to view, analyze and record vehicles.

A 2013 U.S. DOT study in California evaluated the use of inductive loops in vehicle classification. This technology is commonly used on highways for monitoring congestion by counting vehicles and measuring speed. Inductive loops are embedded just below the pavement surface and linked to a data station nearby that records electronic signals from the metal chassis of each passing vehicle.

MnDOT sought to evaluate the U.S. DOT approach in a Minnesota setting that would leverage existing technology. Researchers would use the method to record, identify and classify vehicles passing over inductive loops already installed throughout the Twin
Cities’ highway system.

Following a review of the 2013 U.S. DOT study and other research, the investigative team installed video systems and new loop signature circuit cards at five test sites: two at Interstate highways, one at a major highway and two at signalized intersections. Investigators gathered data at each location for three to four weeks.

Researchers then analyzed 10 to 14 days of loop and video data from each site. For ground truth, the team identified every individual vehicle from video, then analyzed loop data in two ways. First, they compared video and individual electronic signature readings for every vehicle. Then they analyzed loop signature data in 15-minute interval aggregations to evaluate how well the system works without verification on a vehicle-by-vehicle basis.

The research team reviewed over 400 hours of video and counted over 807,000 vehicles. The match rate for all 13 FHWA classes averaged 75 percent with a standard deviation of 8 percent for individual vehicle matching. The overall matching rate was biased toward Class 2 and 3 vehicles, as sedans, pickups and SUVs share similar vehicle chassis configurations and loop signature patterns.

Overall, Class 2 vehicles were matched by inductive loop signatures at a rate of 81 percent accuracy, with 17 percent of passenger vehicles misclassified as Class 3 vehicles. All other vehicle classes had matching rates of less than 50 percent. California results showed an average match rate across classes of about 92 percent.

These results were disappointing. Site conditions may have been a factor, particularly at one site where damaged hardware, broken sealants and other physical conditions were suboptimal. The library of vehicle signature signals in California was used as a basis for Minnesota analysis, but the data sets may not match precisely. Agricultural needs, for example, differ between states, and heavy agricultural vehicles feature different configurations, potentially generating different electronic signatures.

“We need a little more research, which will mostly be done by our office. If we get better accuracy, we’ll be able to get data continuously rather than just 48 hours every couple years,”  said Gene Hicks, Director, Traffic Forecasting and Analysis, MnDOT Office of Transportation System Management.

Further research will be needed before loop signature data can be used reliably in traffic analytics. Researchers suggest that the investigation can be re-evaluated by installing four loop signature cards at two permanent ATR locations with loops, pneumatic tubes and video. Circuit cards can also be updated and classification algorithms better calibrated to vehicle signature profiles.