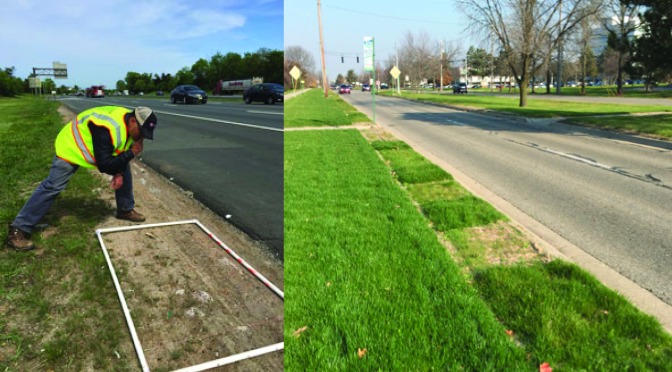 This article was originally published in Catalyst, April 2020.

Vibrant green grass along roadways is a common sight across urban and rural landscapes in Minnesota and many other states, but its survival is a significant challenge—especially in cold climates. Roadway salt and other stressors can cause turfgrass installations to fail, requiring expensive reseeding or sodding efforts.

END_OF_DOCUMENT_TOKEN_TO_BE_REPLACED

Kentucky bluegrass, the grass species that MnDOT typically uses for roadsides, was sensitive to salt; many installations could not tolerate winter deicing salts and died. Research on salt-tolerant grasses begun in 2009 resulted in MNST-12, a grass mix of fine fescues (with 20 percent Kentucky bluegrass for sod cutting, transport and installation stability) that is more salt-tolerant. MNST-12 was installed at many roadsides sites but by 2013, many MNST-12 installations were not thriving. Research into the reasons for these failures and the ways to best establish and care for MNST-12 revealed that this salt-tolerant grass mix requires a different planting and irrigation regimen than the standard MnDOT protocols that had been used for decades on Kentucky bluegrass. When installed as seed, MNST-12 should be planted in August or September; when installed as sod, it can be laid between May and November if sufficient irrigation is available. MNST-12 roots slowly and needs a particular irrigation regimen in early stages. Moisture replacement of 60 percent of its evapotranspiration rate is sufficient to promote establishment.

Minnesota has more than 24,000 acres of green, grassy roadsides, ranging from street terraces to Interstate high-way medians. These roadside environments have many stressors, including heat, drought, insects, weeds, traffic and salt.

MnDOT has traditionally used Kentucky bluegrass for turfgrass, but its poor salt tolerance has resulted in many failed installations. Seed and sod research begun in 2009 produced MNST-12, a salt-tolerant grass mix of mostly fine fescues. By 2013, however, many roadside installations of MNST planted under MnDOT’s standard turf care protocols had failed and the reasons were unclear.

Replacing an acre of failed sod costs up to $25,000. MnDOT needed to learn why the turf failed and find the right methods to establish and care for salt-tolerant grass.

Researchers sought to assess installations of MNST seed and sod across the state to determine the planting and care practices that resulted in successful establishment or in failure. They also wanted to identify best practices for salt-tolerant turf establishment and care.

The study had two phases. In the first phase, researchers identified 16 roadside sites located throughout the state with salt-tolerant turf that had failed or performed poorly. They assessed these sites from July 2013 through 2014, and gathered detailed information about the sites from MnDOT, landscape contractors, sod producers and weather data sites. Information included date and time of installation, sod or seed used, temperature and precipitation at installation, and irrigation and mowing protocols. At each site, researchers also took measurements of ground cover, salinity, temperature, moisture content, surface hardness and depth of soil to top of curb. Soil samples were tested for pH, available phosphorus and organic matter.

Beyond variations in soil moisture, it was unclear whether any other soil aspect promoted the success or failure of site turf. Homeowners at various locations suggested that installation date and supplemental irrigation might have influenced a site’s success.

In the second phase of the study, investigators identified the best management practices for MNST by examining three factors that could influence turf performance:

Soil amendment treatments had little effect on turfgrass performance, whether the plots were seeded or sodded.

MNST planted as seed cannot tolerate the heat and frequent drought conditions of Minnesota’s summers during establishment. Seeding should therefore only occur in August and September. Sod may be laid between May and November, provided there is adequate irrigation.

MNST differs biologically from Kentucky bluegrass and has different watering needs. Root development occurs more slowly and requires a longer period of irrigation during establishment, thriving with moisture replacement between 60 and 100 percent of the evapotranspiration rate. With adequate water, MNST establishes well.

Revisions to MnDOT’s specifications and guidelines are needed. In addition, MnDOT will need to adjust its previous recommendations for watering MNST-12 sod to ensure a successful installation. Further, guidelines for designers and inspectors must be updated. MNST is a different grass community than Kentucky bluegrass–dominated sods: The perception of what “success” looks like must be changed, and this change can be best accomplished through images. New methods of irrigation will need to be devised and implemented. Providing water only as the plant needs it could result in considerable savings in water and labor over time. Additional studies related to best management practices are pending.

This post pertains to the LRRB-produced Report 2017-31, “Best Management Practices for Establishment of Salt-Tolerant Grasses on Roadsides,” published July 2017. 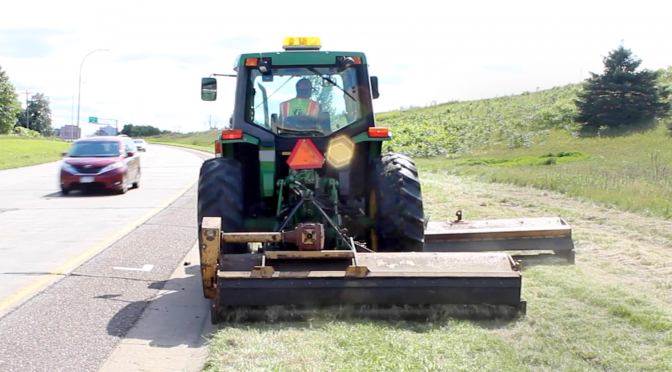 As temperatures fall and days get shorter, MnDOT Metro District maintenance workers are wrapping up a season of mowing grass along roadsides and in medians that they hope will prove a little more efficient than in the past.

Thanks to a research project that installed GPS devices in tractor cabs, operators have a better sense of exactly which areas they need to mow and which areas should be left alone. Five Metro District tractors were tested in 2015. This year, more than 40 tractors were fitted with the automated vehicle location (AVL) technology, which includes a GPS antenna, an on-board central processing unit (CPU) and an in-cab screen with a user interface.

Trisha Stefanski, Metro District asset management engineer, expects one of the biggest benefits of the project to be a reduction in herbicide use. Maintenance crews use herbicide to control the spread of noxious weeds that sometimes get spread during mowing operations. Mapping exactly where noxious weeds are, and providing that information to operators on a real-time, in-cab screen and user interface helps them mow around those areas.

“We’re really hoping it will reduce the amount of herbicide that we’re putting on our roadways by 50 percent,” Stefanski said. “We’re not certain that will be the number, but that’s what we’re hoping for. We think just not mowing those areas will not spread as many noxious weeds and so we don’t have to apply as much herbicide.”

Metro District operators, such as Jesse Lopez, give the AVL technology rave reviews.

“Basically you can see what you shouldn’t mow and what you should mow. So, it makes it easy for me. It’s just like playing a game,” Lopez said. “This actually helps me to optimize what my job is. I know exactly where I’m at and where I’m going. I think everyone should use it – absolutely everybody who is in a mowing situation or a plowing situation.”

In addition, the AVL technology helps maintenance supervisors keep tabs on exactly where their operators are in real time. It also helps supervisors complete reports by automatically providing the geographic areas where mowing has been completed.

Stefanski says the project has gone really well, and she hopes collecting more data over another mowing season will show real savings on herbicide use. In the meantime, she is thinking of other ways AVL technology could be applied to maintenance operations.