A new program piloted in western Minnesota to increase snow fence use among private landowners has been so successful that MnDOT is looking at rolling it out statewide.

The University of Minnesota’s Center for Integrated Natural Resource and Agricultural Management worked with MnDOT District 8 staff for more than a year to develop and test a snow fence outreach program that could be used by MnDOT district offices.

“After our training, we saw a 300 percent increase in the number of standing corn rows, and that was on the initiative of a few people in the maintenance group. We’d like to spread the training to other districts,” said Dean Current, Director, University of Minnesota Center for Integrated Natural Resource and Agricultural Management.

Living snow fences are natural vegetative barriers that trap blowing snow, piling it up before it reaches a road, waterway, farmstead or community. It could include leaving a few rows of corn or hay bales along the road side, or even temporary fencing.

MnDOT has about 3,700 sites that are suitable for snow fences. It estimates that if 40 percent of problematic sites had snow fences, the state could save $1.3 million per year in snow management costs. Despite the cost, safety and environmental benefits, private landowners have shown limited interest in the program. An effective outreach program was needed along with strategies for identifying MnDOT personnel who could promote the practice and recruit landowners to the program.

How Did We Do It?

In January 2016, investigators surveyed MnDOT District 8 employees to gauge their understanding of snow fences as well as their approach to working with landowners to implement blowing snow control measures. The investigators studied survey responses to assess awareness of and interest in promoting the use of snow fences and grading to reshape road environments for snow and erosion control. They also examined snow fence programs from around the country, identifying types of snow fences used and characteristics of programs that successfully recruit landowner participation.

Results from these efforts were used to design an outreach program that was presented to District 8 staff. In January 2017, investigators surveyed the staff to evaluate the training and redesign the program accordingly. Finally, investigators evaluated market values of various snow fence designs.

What Was the Impact?

Initial survey results identified two relevant types of district personnel: maintenance and program delivery staff. Maintenance staff involved in plowing and road care interact more with landowners than do program delivery staff, who design or redesign roadways and may be involved in acquiring land for snow fences. Though tailored for each group, all training described the MnDOT blowing snow control program and its implementation, the role of snow fence coordinators, operational benefits and awareness of how promotion of the program fits within the scope of an employee’s duties.

Keys to the success of snow fence programs around the country include strong relationships and direct communication with local landowners, funding, landowner interest in conservation and public safety, and observable benefits.

A follow-up survey showed marked improvement in staff knowledge of the program and willingness to promote it. Landowner participation grew from four sites to 15 in the year after training, due mostly to maintenance staff participation. Survey respondents suggested potential program improvements such as more program champions; outreach in spring and summer at community and farmer gatherings as well as at local and state fairs; and a clearer understanding of how program promotion fits within job responsibilities.

A new project currently under way aims to further expand these efforts.

This post pertains to Report 2017-42, “Expanding the Adoption on Private Lands: Blowing-and-Drifting Snow Control Treatments and the Cost Effectiveness of Permanent versus Non-Permanent Treatment Options.” Related research can be found by searching “snow fences” under “Projects” at MnDOT.gov/research. 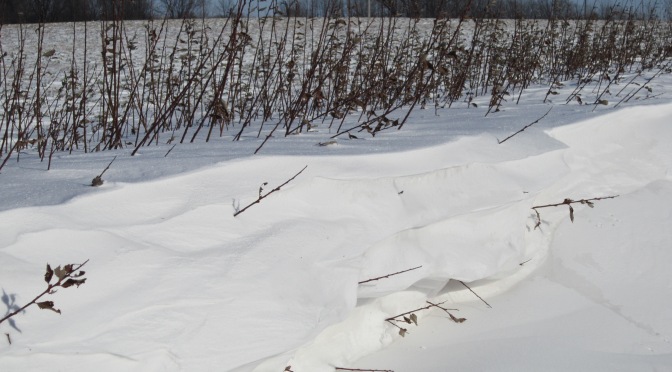 The benefits of living snow fences and other snow control tools to keep roadways clear of blowing and drifting snow have been known for decades, and MnDOT has been using a variety of these techniques for years to catch  snow before it gets to a road.

Living snow fences often consist of trees, grasses and even corn stalks left standing in a farmer’s field.  Now willow shrubs are being added to the list as a fast-growing, inexpensive snow control measure.

Researchers recently completed a study that investigated whether willow shrubs could make good living snow fences. While typical snow-fence plants, such as dogwood or cranberry shrubs, can take five to 20 years to establish themselves, shrub willows were effective at trapping snow after just two growing seasons, according to the study.

In spring 2013, researchers installed three varieties of shrub willow side-by-side in two-row and four-row configurations along about a quarter of a mile of Highway 14 in Waseca, where snow drifts are an issue. In April 2014, they cut the shrubs down to the ground  to encourage branching and bush density. Though the trimmed willows had little impact on drifting snow the first winter, each willow-shrub plot was collecting two to three metric tons of snow by the second winter, according to the research report. Researchers believe that after three or four growing seasons the willow shrubs could catch the entire mean annual snowfall on the site.

In the four-row configuration recommended by researchers, costs of raising, furnishing, planting and mulching came to about $3.60 per plant, which is dramatically less than the contract bid cost for traditional living snow fence species that cost more than $50 per plant. In addition, the willow shrubs could be harvested and sold as biomass every few years to provide an income source.

Willow trees is just the latest advancement in the state’s snow control program. A 2012 research project evaluated the costs and benefits of living snow fences and provided MnDOT with a payment calculator to determine how much to compensate landowners for installation and maintenance costs.

A recent research implementation project created a mobile-friendly Web version of the payment calculator tool.  The website also contains a tool for designing a own snow fence.

MnDOT has used these tools and other promotional efforts to nearly double the number of farmers with contracts for corn rows enrolled in the Living Snow Fences program.

The willow species recommended by researchers will be evaluated further in 2017 when they install it as a living snow fence on a new construction site on Highway 60 between Windom and Mountain Lake. Researchers also recommend a future study to compare volume of road salt use before and after installation. They also want to look into identifying appropriate buffer distances to keep willow roots from interfering with cropland root systems.