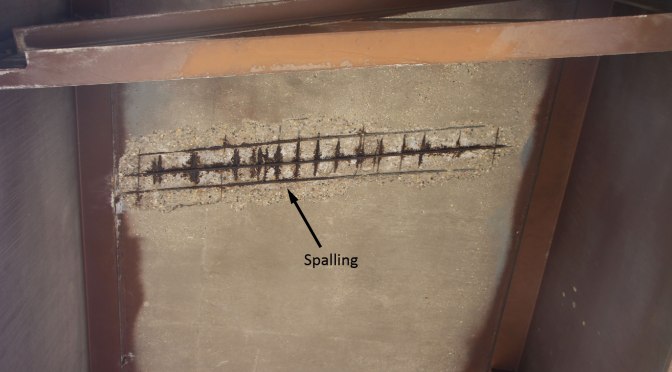 Bridge decks reinforced with one layer of epoxy-coated rebar and a bottom layer of uncoated steel rebar show corrosion damage sooner than decks constructed with all epoxy-coated rebar. Inspection methods should be enhanced to add a rating for cracking density on the underside of bridge decks. Repairs to mixed rebar decks should be conducted once a key deck surface inspection element has received a condition rating of two and held that rating for seven years, which is sooner than the average repair time of 8.5 years.

Steel also corrodes in salt environments, even when embedded in concrete. Water and road deicing chemicals can reach the steel and damage its strength and integrity. Between 1973 and 1990, MnDOT built approximately 660 bridges with more expensive, epoxy-coated rebar in the top layer of reinforcing matting and standard black rebar in the bottom layer. The coated top layer, only 3 inches below the deck surface, was expected to resist corrosion, and damage from salt and water would not reach the next layer of rebar, another 3 inches down in a 9-inch deck.

Researchers reviewed reports from inspections, conducted every two years, for bridges with mixed reinforcement decks and decks with 3-inch strips of fiber reinforcement mixed into the concrete. They narrowed their review to bridge inspection data from 506 bridges with epoxy-coated rebar (including 35 control decks with all-epoxy rebar) built between 1973 and 1990, and 22 bridges with fiber-reinforced concrete and epoxy-coated rebar (including four controls with no rebar) built between 2012 and 2017. All of the bridges were inspected through 2017.

Investigators then conducted site evaluations of 75 mixed rebar decks and 25 all-epoxy rebar decks, as well as 11 fiber-reinforced concrete decks with epoxy rebar and four without rebar. Site surveys focused on confirming the accuracy of recent inspection reports and recording signs of cracking, spalling and other deterioration conditions.

“There’s not really a good visual inspection standard for quantifying cracking under the bridge deck, and that’s especially important for these types of bridges with mixed rebar. Using only epoxy-coated rebar in decks was a good idea.” —Ben Dymond, Assistant Professor, University of Minnesota Duluth Department of Civil Engineering

Data sets were too small to draw any conclusions about possible differences in performance of fiber-reinforced decks compared to bridge decks that were not built with fibers.

The research team recommended amending bridge inspection procedures to add a new rating element for quantifying crack density on the underside of decks to anticipate and prevent spalling and delamination on the underside of mixed rebar decks. The team also recommended that once the deck condition element in mixed-bar decks holds a rating of two for seven years, more robust cracking sealing techniques should be considered to prevent it from reaching a rating of three. (For most bridges, that repair typically occurs after 8.5 years of service.)

Finally, the team recommended continued evaluation of fiber-reinforced decks as inspection data is collected over time.

“These findings may help us shift some priorities for repairing or replacing mixed rebar bridges. We will continue to advocate for the use of all epoxy-coated rebar wherever we anticipate high levels of chlorides.” —Nick Haltvick, North Region Bridge Construction Engineer, MnDOT Bridge Office

This research confirms that MnDOT’s current practice of using only epoxy-coated rebar in bridge decks remains a durable solution and offers the best long-term value in terms of repair needs. MnDOT will continue to evaluate fiber-reinforced concrete deck behavior and may adopt a rating method for identifying crack density on the underside of concrete decks.