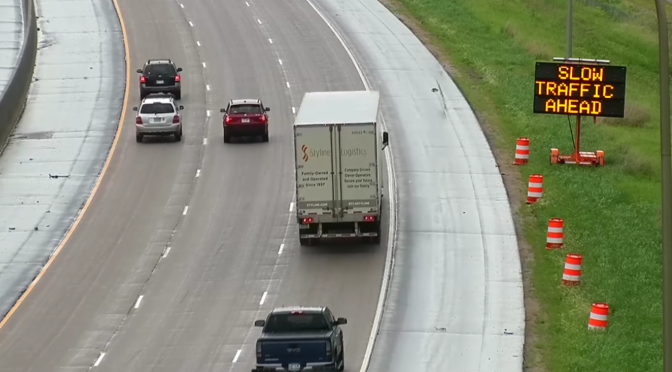 Maintenance and construction on Minnesota’s roadways often create travel disruption for drivers through traffic slowdowns and queuing. MnDOT has previously tested systems to inform drivers of traffic backups in rural work zones, but slowdowns near complex urban work zones are less predictable. Drivers traveling at highway speed may come upon congestion suddenly, resulting in abrupt braking and the risk of rear-end collisions.

Posting advisory speed limit messages near these work zones has not been effective. To address the problem, MnDOT developed a Smart Work Zone Speed Notification (SWZSN) system designed to inform drivers of the actual speed of slowed downstream traffic near large urban work zones. Researchers from the Minnesota Traffic Observatory then tested and evaluated this system over time in an actual urban highway construction work zone.

The primary objectives of the project were to quantify the speed notification system’s effect on drivers’ behavior and determine its impact on the safety of the work zone. With an effective work zone speed notification system, MnDOT’s goal was to create safer work zones by giving highway drivers real-time information that would influence them to slow down adequately before a congestion hazard, avoiding dangerous braking and collisions.

The SWZSN was designed to collect traffic speed data throughout a work zone and run it through an algorithm, generating the appropriate message for drivers on a variable message sign, such as “35 MPH 1 Mile Ahead” or “Stopped Traffic Ahead.”

MnDOT wanted to deploy the system within a project replacing 4.4 miles of Interstate 94 (I-94) east of downtown St. Paul. The construction was to be completed in stages between spring 2016 and fall 2017. This large project would include many lane closures and expected traffic congestion; the new system could mitigate some of the traffic disruption. The deployment and evaluation of the SWZSN took place in three phases:

To collect data for the system, MnDOT’s Regional Transportation Management Center mounted Wavetronix speed detection sensors on poles every half-mile in the work zone, replacing old loop detectors. Researchers also deployed nine solar-powered cameras on mobile trailers about every half-mile. This allowed researchers to capture traffic flow images in more strategic locations where traffic queues were forming since the construction zones were complex, crowded and often changing, with many visual obstructions. Data were transferred primarily via an arranged wireless radio link to the Minnesota Traffic Observatory.

Researchers then applied their own innovative methodology—a Trajectory Extraction Tool (TET)—to the traffic images captured by the cameras using video alone to calculate a vehicle’s deceleration rate when approaching traffic congestion. The cameras were positioned to optimize TET performance. Researchers gathered tens of thousands of data points for analysis from traffic in the work zone over the course of the project.

During the first year of SWZSN implementation, the project team identified discrepancies in the speed notification algorithm, such as unreasonable or delayed messages. By the second construction season, those anomalies were significantly reduced. The most significant results of this project showed that in situations where messages communicated to drivers were consistent and accurate, reductions of more than 30 percent in the selected deceleration rates were observed.

Most importantly, the speed notification system is clearly noticed by drivers and results in a statistically significant influence on drivers’ behavior, suggesting that downstream speed notification is an effective traffic control tool.

This evaluation project was considered a success: The system is more effective than previously used work zone advisory speed limits. The SWZSN has already been deployed in two highway construction sites and will be used for future projects.