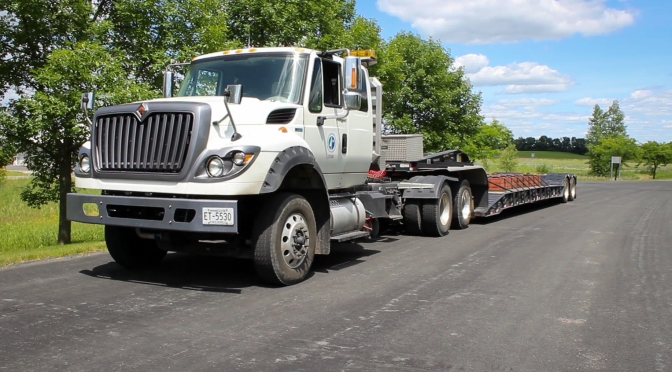 The only way to test pavements is to destroy them — slowly and painstakingly, one moving vehicle at a time. At MnROAD, the state’s world-renowned pavement research facility, the bulk of this monotonous-but-necessary work is performed by live traffic passing through Albertville on I-94. But on the facility’s 2.5-mile low volume road test track, which simulates rural road conditions, more controlled methods are preferred.

Doug Lindenfelser is one of several MnROAD employees who take turns driving an 80,000-pound semi tractor trailer in laps around the closed-loop low-volume track. The truck is loaded to the maximum allowable weight limit on Minnesota roadways. As it passes over the facility’s 23 distinct low-volume test cells, an array of sensors capture data on the pavement’s performance, which researchers then use to design stronger, longer-lasting roads. The truck only drives on the inside lane; that way, the outside lane can be used as an “environmental lane” to compare  damage caused by loading  vs. damage caused by environmental factors.

He has other duties as well, but on a given day, Doug might drive the truck 60 or 70 times around the low-volume road test track. It might not sound very exciting, but as Doug explains, some days his job can be quite interesting. We interviewed him on camera during a recent visit to MnROAD. The resulting video is available above and on our YouTube channel.

For those who might be wondering, all this diligent destruction of pavement has paid off. It is estimated that MnROAD’s first phase of research (from 1994-2006) has resulted in cost savings of $33 million each year in Minnesota and $749 million nationally. Cost savings from its second phase (2007-2015) are being calculated, and the facility is scheduled to enter its third phase in 2016.