Entomologists have developed an innovative method for surveying bumble bees alongside Minnesota roadways, the results of a new research study funded by the Minnesota Department of Transportation.

END_OF_DOCUMENT_TOKEN_TO_BE_REPLACED 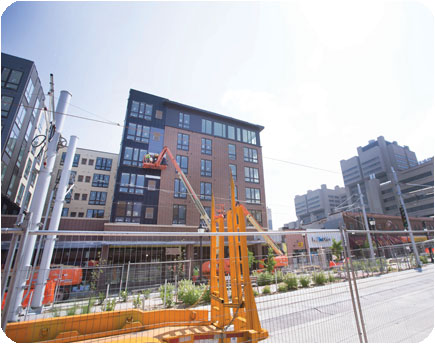 A new research study is recommending ways to make it easier for developers and employers to select sites that encourage living-wage jobs and mixed-income housing near transit.

A key finding of the study, which was based on interviews with developers and business leaders, revealed a pent-up demand for transit access in the Twin Cities metropolitan region.

A team led by University of Minnesota researchers Yingling Fan and Andrew Guthrie found that providing a great work location is critical for employers in recruiting highly skilled young professionals who are likely to desire—or demand—urban living and access to transit.

They also found that multifamily residential developers, redevelopment specialists, and large corporate office tenants have a strong interest in transit-accessible sites, but regulatory barriers, cost issues, and uncertainty surrounding future development of transit often discourage both developers and businesses from selecting such sites.

More details about the study and key recommendations