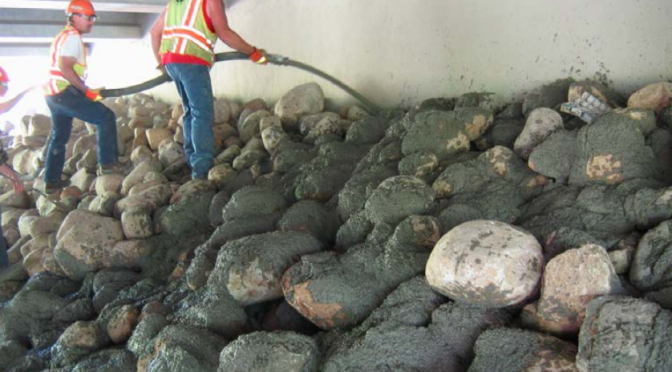 Bridges over Minnesota waterways need to be protected from currents by a field of interlocking angular rocks called riprap. Without these rocks along the abutment, moving water could wear away the soil that supports a bridge’s foundation. The faster the water, the larger the riprap must be to provide adequate protection.

While some parts of Minnesota have quarries rich with angular rock, other parts don’t – particularly the northwest and western regions. Bridge projects in those areas sometimes resort to the expensive practice of trucking in stones. Other times field stones are used, but they are less effective and must be replaced more often.

At a few test sites around the state, researchers have used a grout mixture to cement smaller, rounded rocks together at a bridge abutment. Once applied to the rocks, the mixture forms what is called “matrix riprap.” The concept is in use in Europe for many bridge piers, but MnDOT was more interested in learning how it could be used on bridge abutments.

Matrix riprap is currently in use in Minnesota at the following bridges:

In May 2012, matrix riprap was placed at the Milaca bridge, which sits alongside a high school. Researchers hoped the use of matrix riprap would prevent vandals from removing the riprap rock and throwing it into the river. According to Nicki Bartelt, a MnDOT assistant waterway engineer, the matrix riprap has proven to be extremely strong and effective.

“Not only is matrix riprap significantly stronger than regular riprap, but it helps prevent vandalism as well,” Bartelt said. “The Milaca installation has been in place for three years now. It looks pretty good and it’s weathering well.”

In the lab, matrix riprap held up extremely well on mechanical pull tests and hydraulic flume tests. In fact, researchers were unable to determine the matrix riprap fail point on many tests, even after applying 10 times the shear stress that regular riprap can withstand. Matrix riprap was tested with both angular and round rock with no change in performance.

“The Highway 60 bridge is being replaced, and the river there has extremely high velocities, so we’re using the matrix riprap instead of regular riprap just because of the size of rocks that would be needed,” Bartelt said.

At least two more installations are planned for 2016. In the future, researchers plan to determine the fail point for matrix riprap. They also hope to study potential environmental effects the grout may have underwater.

MnDOT has also worked with local governments that have tried matrix riprap for themselves. One municipality is trying it as a heavy duty erosion control measure. The concept is catching on outside Minnesota as well.

“We have gotten a lot of inquiries from other states, and we have lent out the spec a lot,” Bartelt said. “Iowa, New Hampshire, Maine, Indiana, Wisconsin and Illinois are among the states to express interest. We have talked to a lot of people about it, so they tend to use our research.”