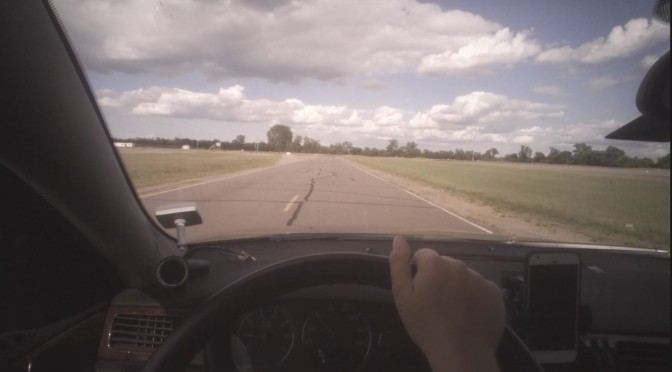 Lane-departure crashes on curves make up a significant portion of fatal crashes on rural Minnesota roads. To improve safety, solutions are needed to help drivers identify upcoming curves and inform them of a safe speed for navigating the curve.

“Traditionally there are two ways to do this: with either static signage or with dynamic warning signs,” says Brian Davis, a research fellow in the U of M’s Department of Mechanical Engineering. “However, while signing curves can help, static signage is often disregarded by drivers, and it is not required for roads with low average daily traffic. Dynamic speed signs are very costly, which can be difficult to justify, especially for rural roads with low traffic volumes.”

In a recent project led by Davis on behalf of MnDOT and the Minnesota Local Road Research Board, researchers developed a method of achieving dynamic curve warnings while avoiding costly infrastructure-based solutions. To do so, they used in-vehicle technology to display dynamic curve-speed warnings to the driver based on the driver’s real-time behavior and position relative to the curve. The system uses a smartphone app located in the vehicle to provide the driver with visual and auditory warnings when approaching a potentially hazardous curve at an unsafe speed.

“Highway curves [make up] 19 percent of the total mileage of the paved St. Louis County highway system, yet these curves account for 47 percent of all severe road departure crashes,” says Victor Lund, traffic engineer with St. Louis County. “In-vehicle warnings will be a critical strategy to reduce these crashes.”

To begin their study, researchers designed and tested prototype visual and auditory warning designs to ensure they were non-distracting and effective. This portion of the study included decisions about the best way to visually display the warnings and how and when audio messages should be used. “To create the optimal user experience, we looked at everything from how to order the audio information and when the message should play to the best length for the warning message,” says Nichole Morris, director of the U’s HumanFIRST Lab and co-investigator of the study.

Next, a controlled field test was conducted to determine whether the system helped reduce curve speeds, pinpoint the best timing for the warnings in relation to the curves, and gather user feedback about the system’s usefulness and trustworthiness. The study was conducted with 24 drivers using the test track at the Minnesota Highway Safety and Research Center in St. Cloud, Minnesota. The selected course allowed drivers to get up to highway speeds and then travel through curves of different radii, enabling researchers to learn how sensitive drivers are to the position of the warnings.

Based on the study results, the system shows both feasibility and promise. “Our in-vehicle dynamic curve warning system was well-liked and trusted by the participants,” Davis says. “We saw an 8 to 10 percent decrease in curve speed when participants were using the system.”

The project was funded by MnDOT and the Minnesota Local Road Research Board.