In a continuing effort to better understand nonmotorized traffic patterns in Minnesota, researchers from the Humphrey School of Public Affairs have partnered with the Minnesota Department of Transportation (MnDOT) to develop guidelines and analyze information collected in bicycle and pedestrian traffic counts throughout the state. 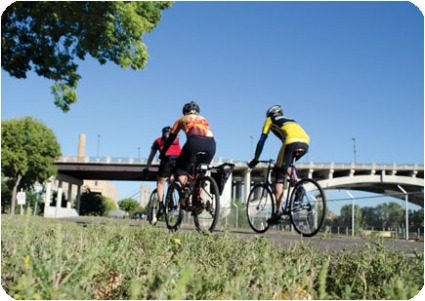 The research team, led by Professor Greg Lindsey, aims to develop consistent methods for monitoring and assessing bicycle and pedestrian traffic that can be used in both permanent, automated traffic counts and short-term manual counts. The goal is to provide evidence for decision making that Minnesota cities have historically lacked, Lindsey says. “We’ll have practical, useful information about bike and pedestrian traffic that can help local jurisdictions as they plan and invest in infrastructure,” he says.

As part of the 18-month project, the research team created a set of tools and methods for short-duration manual counts of nonmotorized traffic, held training workshops, and organized a statewide counting effort involving 43 Minnesota municipalities last fall. The overall response was positive, Lindsey says, and some communities are already using their collected data to submit grant proposals for projects related to nonmotorized traffic.

In addition, Lindsey and his team have examined traffic information from six permanent counters on Minneapolis trails. The continuous counts collected at these locations help the researchers understand traffic patterns and the factors that affect them, Lindsey says. For example, the team found that bike and pedestrian traffic vary by trail type, time of day, day of week, and season.

“Once we know the patterns at permanent sites, we can develop factors that help us expand short-term counts from other locations with similar conditions,” Lindsey says. The factors could be used to estimate anything from total daily traffic to annual traffic, as long as the short-term count location is similar to an existing model.

Based on the overall results of the study, the research team developed recommendations for MnDOT. These include continuing to coordinate statewide short-term field counts, demonstrating the feasibility of automated counting technologies, and beginning to integrate nonmotorized and vehicular traffic databases.

Based on these recommendations, MnDOT is moving forward with a new project that will collect more short- and long-duration counts throughout Minnesota, says Lisa Austin, ABC Ramps coordinator at MnDOT. The next phase of work aims to collect counts for pedestrians on sidewalks, bicyclists on shoulders and in bike lanes, and pedestrians and bicyclists on multiuse trails. MnDOT plans to install more permanent, automated counters in suburban and midsize cities and to conduct additional manual counts in smaller cities around the state, Austin says.

“We’re really excited that this bike and pedestrian counting project is moving into wider implementation,” Austin says. “This next phase will help us see which automated counting technologies work well and make recommendations for moving forward on a broader scale.”

Reprinted from the CTS Catalyst, May 2013.