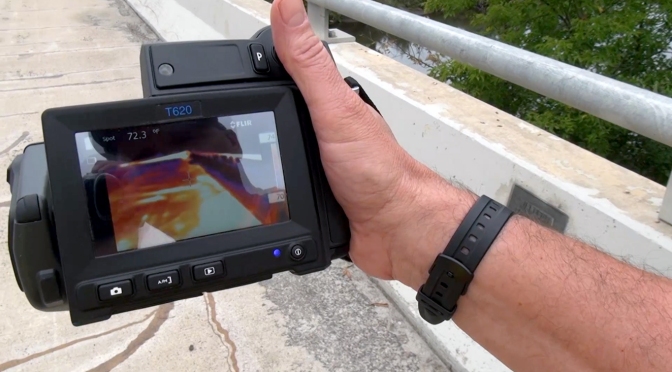 Over the last several years, MnDOT has been participating in a national pooled-fund study on using infrared cameras to spot subsurface damage on bridge decks. These damaged areas just below the deck surface are called “delaminations,” and they’re what causes potholes and cracks on the surface. Detecting them is a key part of what MnDOT bridge inspectors do, and it’s huge challenge.

Currently, one of the primary methods of locating delaminations is “chain-dragging” — literally, dragging chains across the surface of a bridge deck. Using this method, inspectors can listen for evidence of hollowed-out areas beneath the surface, which produce a different sound than solid areas. While it works, this practice forces bridge crews to close down lanes and work near moving traffic. These issues have led Minnesota and other states to look for alternatives, and infrared or “thermographic” imaging is one of the top contenders.

In the video above, MnDOT bridge inspector Eric Evens demonstrates how to inspect a bridge deck using an infrared camera (specifically, a FLIR T620 — the model selected for the study). The delaminated areas appear as white or “hot” spots in the image. Evens does a nice job of explaining some of the benefits and potential uses of the camera, including minimizing traffic delays. He also demonstrates the camera’s ability to simultaneously capture photos and infrared images, which could be useful for cataloging the conditions of bridge decks and programming schedules for repairs.

However, as Evens pointed out during the filming, there are both pros and cons to using infrared thermography. One downside is it’s really only effective as the bridge deck warms up in the morning. Another is that it takes some practice to be able to identify which of the “hot spots” are actual delaminations and which are merely dirt or debris on the deck surface, or some other kind of false positive.