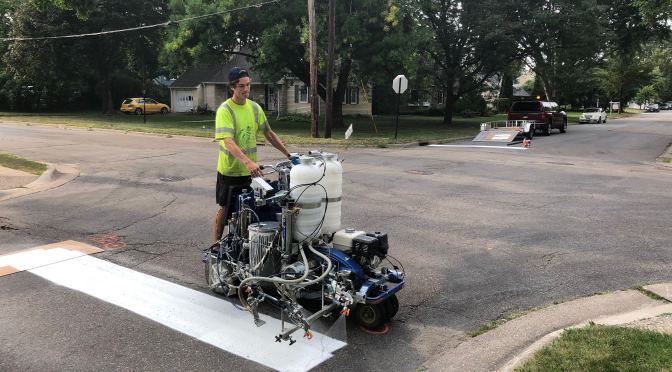 How well do the stop lines at stop-controlled intersections actually work as a safety feature? Through an extensive safety study and a before-after field observation, a recent Minnesota Local Road Research Board study showed that the assumed safety effects of stop lines as a means of influencing driver behavior are not well supported by the evidence.

Across Minnesota and the nation, the most common roadway geometry is the stop-controlled intersection, with the stop sign as the most common form of traffic control. Although it is not required, the stop line is often combined with a stop sign to indicate where drivers must stop before they enter the conflicting traffic lane. The Manual on Uniform Traffic Control Devices (MUTCD) states that the stop line must be solid white and measure between 12 and 24 inches wide. The marking is most often a painted latex line, while thermoplastic lines are also common.

Citizens often request stop lines for intersections with frequent stop sign violations. Although one stop line is not an expensive addition, maintaining them at hundreds of intersections can become a sizable expense for local agencies. One Minnesota city estimated that annual maintenance cost approximately $1,000 per intersection. Further, because of the state’s harsh winters, stop lines in Minnesota last only a few years.

“This project conducted a comprehensive investigation into the safety effects of stop lines at two-way stop-controlled intersections, providing planners and engineers more robust data to use when considering whether or not to implement them,” said John Hourdos, director, Minnesota Traffic Observatory, University of Minnesota.

There is little research on this pavement marking’s effect on driver behavior; its benefits are assumed, not proven. MnDOT and local agencies wanted to learn the definitive effects of stop lines, both as a possible influence on crash reduction and also on driver response at stop-controlled intersections.

The main objective of this project was to determine the safety effects of stop lines at stop-controlled intersections. A primary practical goal was to give local agency traffic engineers definitive data that would allow them to make informed and cost-effective decisions regarding stop line installation and maintenance.

The project began with a literature search to determine the effects of stop lines at stop-controlled intersections. Then researchers investigated whether there are quantifiable and statistically significant performance measures showing that stop lines have a positive effect on intersection safety through two research efforts: a cross-sectional safety study and an observational before-after field study. Both studies were guided by the following questions:

Then they collected stop line and/or crosswalk data for the cities’ intersections between 2004 and 2018, accumulating more than 14,000 approach-years (the number of stop-controlled approaches multiplied by the number of years examined). This large sample formed the basis of the safety study. Researchers closely examined detailed features of each intersection by year, including signs and lines, speed limits, available sight distances and whether they were adequate, and crash locations.

Observational before- and after field study. With the Technical Advisory Panel’s assistance, researchers selected 23 stop-controlled intersections in several cities without stop lines. They installed video cameras, recording normal traffic for two weeks. Stop lines were then installed. After a two-week period to allow driver familiarity, researchers resumed collecting video of drivers’ responses to the new stop lines for another two weeks. Sixteen of the filmed intersections were used in the final before-after evaluation.

What Was the Result?

The literature search showed that before this project, there were no studies of the effects of stop lines on driver behavior.

The main finding from the cross-sectional safety study was that the presence of a stop line showed no association with crash occurrence when used as the sole predictor.

“The benefit of this study is that the installation of stop lines doesn’t directly correlate to improving traffic safety. By no longer installing and maintaining stop lines, agencies can allocate more funding elsewhere for proven safety improvements,” said Nick Bauler, traffic safety coordinator, City of Edina.

The observational before-after field study showed that in all cases, both before and after line installations, drivers stopped 10 feet or more after the stop line or stop sign. The more space there was between the line or sign and the edge of the conflicting driving lane, the more drivers ignored the stop line. Some cases showed drivers stopping even closer to the conflicting lane than before. Some “rolling stops” became slower rolling stops. Researchers concluded that while the marking has some effect, most frequently it is not the predicted or desired effect.

This research will be made available to local agencies, where traffic engineers may use its results to consider that the expense of installing and maintaining stop lines may be more effectively applied toward other means to influence drivers’ behavior at stop-controlled intersections.

3 thoughts on “How Well Do Stop Lines Work as a Safety Feature?”