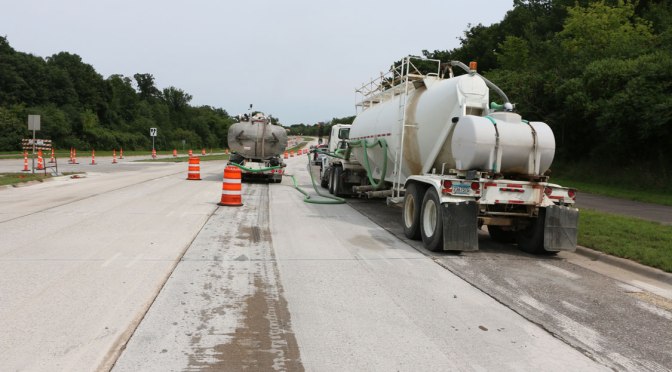 A new MnDOT research study determined that depositing concrete grinding residue (CGR) slurry at specific rates on roadside vegetation and soil may not cause lasting harm to plant growth and soil quality; however, follow-up research is recommended.

Study results showed that CGR did not appear to hinder vegetation growth or soil quality, but did change soil chemistry. At some roadside areas, the increase in soil pH enhanced plant growth. Results cannot be generalized for all soil types, plant communities, concrete residues or water sources in Minnesota. Access to real-time slurry disposal activity is needed for a thorough investigation.

Construction crews use diamond grinders to level newly cured concrete with adjacent slabs of older pavement and to smooth new pavement surfaces for improved friction and tire traction. Diamond grinders are fitted with hoses for rinsing grinding burrs with water to keep the burrs clean and prevent overheating. Vacuum lines then collect the residual dust and rinsing fluids, generating a slurry of concrete grinding residue (CGR) that is frequently discarded on roadside slopes and vegetation.

When slurry dries, it leaves pale gray patches on roadside vegetation and other features, lightening the soil surface for a season or more. The effect of this slurry on vegetation, soil and drainage was unknown. Engineers and researchers presumed that the concrete dust temporarily coats roadside turf and plants, raises the soil pH, clogs soil pores and inhibits water drainage, invites invasive species to take root, and may infiltrate storm drains and waterways.

A literature review indicated that related research has been limited and that vegetation samples of only one or two species have been examined. Researchers developed two approaches for investigating the impact of CGR on plant density, plant growth and soil properties.

First, researchers collected CGR slurry from a slurry tank at a Minnesota construction site to replicate residue application at the Kelly Farm, an Iowa State University research site near Ames, Iowa, that features prairie vegetation similar to that found along Minnesota roadsides. They applied slurry at application rates of zero, 10, 20 and 40 dry tons per acre. Plant cover, soil chemistry and soil structure properties, such as plant biomass, density, hydraulic conductivity, infiltration and pH, were measured before the slurry was applied and again at one-, six- and 12-month intervals after application.

Statistical analyses established that at the Kelly Farm, CGR did not significantly impact soil physical properties and plant biomass, but did alter soil chemistry. Levels of soil pH, electrical conductivity, metals content and other properties rose significantly after CGR application. These effects increased with increases in application rate and decreased at increased soil depths. These changes did not reduce soil quality, and higher pH levels did not persist after one month. For certain warm-season grasses and legumes, increased pH improved plant growth. Some nutrients such as calcium and magnesium leached from CGR could benefit plant growth as well.

The two roadside environments yielded differing results. Slurries had been deposited in 2009 at the first site and in 2013 at the second. At the first site, soil bulk density and hydraulic conductivity in the slurried areas did not differ significantly from measures at the nonslurried areas; at the second site, the levels differed significantly. At both sites, electrical conductivity, calcium content and base saturation values were higher at the areas with CGR than the areas without CGR.

Researchers concluded that at the Kelly Farm and at the roadside locations, slurry applications at a rate of up to 40 tons per acre did not reduce soil quality and vegetation growth for longer than three years.

Efforts to access grinding operations and CGR deposits in real time were not embraced by Minnesota’s concrete industry, and researchers were unable to properly assess residue composition and rates, and volumes of slurry deposition on roadway environments. A thorough investigation of residue impact will require such access and follow-up on site conditions after established periods of time.

Researchers noted that findings cannot be easily generalized since CGR compositions may vary depending on source and water quality, influencing soil and vegetation differently, and soil and plant communities may differ in response to comparable CGR applications. Investigators recommended that MnDOT develop quick field measures of slurry pH, electrical conductivity and alkalinity to use in adjusting slurry spreading rates at grinding sites.