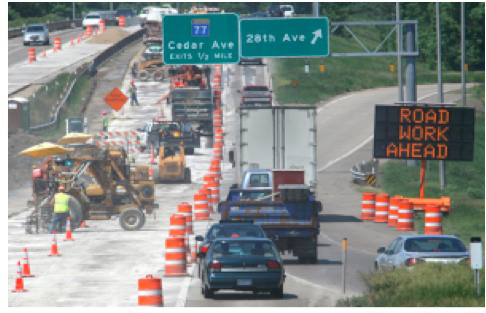 Data from a new system for tracking work zone intrusions may be used to change work zone design and policies, reducing the risk of injury and death from intrusion crashes.

MnDOT and the Local Road Research Board engaged researchers to develop a user-friendly system that allows highway crews to quickly record instances of motorists’ intrusion into work zones, using a laptop, tablet or paper.

“This collaboration resulted in a fast, efficient and easy-to-use system because crews and supervisors let us know throughout the process exactly what they needed to consistently report work zone intrusions,” said Nichole Morris, Director, University of Minnesota HumanFIRST Laboratory.

The goal of this research project was to develop and test an efficient, comprehensive and user-friendly reporting system for intrusions into work zones. It was essential for the system to be accepted by highway workers. The information collected from the system, which was modeled after the existing MNCrash report, would then be used to examine risk factors to reduce intrusions and danger to workers. Safety data would be relayed back to workers and to MnDOT managers, providing an empirical basis for design changes to work zones, as well as future policy recommendations to the state government.

“To reduce work zone intrusions and make work zones safer, we need to track and analyze the intrusions. This reporting system will generate the data we need to make smart changes and possibly to influence legislative policy,” said Todd Haglin, Emergency Management and Safety Manager, MnDOT Office of Administration.

To design a usable system for reporting work zone intrusions, research designers had to:

The research team interviewed work zone supervisors from rural and urban truck station locations across the state: in Baxter, St. Cloud and Duluth and at Cedar Avenue near Minneapolis-St. Paul. Researchers sought to learn what crews and supervisors considered an intrusion and what they thought should be reportable elements of the intrusion, such as the work zone layout, weather, location, time, visibility, road conditions and maneuvers of the intruding vehicle.

Researchers used information gathered from the interviews to develop four typical intrusion scenarios—which were reviewed and revised by MnDOT supervisors—and used these scenarios to test the prototype reporting interface. Then they conducted usability tests with these scenarios and with actual intrusions that crews had experienced. Users suggested changes to the report format throughout the process.

Crews and supervisors collaborated with researchers during three rounds of testing, revising the reporting interface after each round. An online beta version had been supplemented with a paper version. Both versions were revised through this iterative design process.

This design approach allowed the research team to produce a report interface incorporating the very specific needs of the work zone crews and supervisors:

Supervisors and workers involved in the design process gave high marks to the final version of the reporting system. The design is considered complete. Researchers had created the interface as a free-standing program, using the University of Minnesota’s digital resources to build and evaluate their design. For this reporting system to be made  vailable for use by MnDOT and other agency workers, MnDOT must engage MNIT, the state’s information technology professionals, to determine where the system will reside and to integrate it into the state’s existing computer platform.

One thought on “Reporting Driver Intrusions in Work Zones”