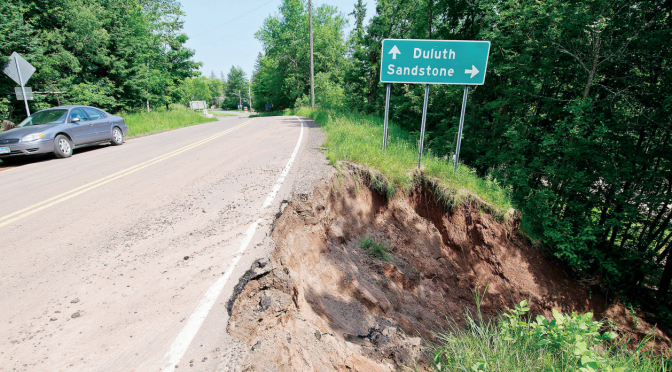 “When most studies end, further research is needed. This project, however, created a user guide that local engineers can use right away to repair destabilized slopes,” said Blake Nelson, Geotechnologies Engineer, MnDOT Office of Materials and Road Research.

Winter weather and spring storms leave their mark on slopes along highways and at bridges. Erosion and other forces cut gashes and ravines into slopes. Some damage such as failing pavement at shoulders or sloughed off sections of a slope can be obvious to road users. Other, more subtle signs of creeping embankments may only catch the attention of engineers.

Slope failures must be repaired to prevent damage to roadways and embankments. When slope damage is severe, a geotechnical engineering firm must step in at some expense. By the time the first soil sample bore is pulled, county engineering departments may already be facing a bill of $20,000. But when damage is less severe, the county can often stabilize the slope using local materials and simple techniques.

Determining whether slope damage can be completed by local engineers or requires outside help remains a challenge for county road departments that often lack geotechnical expertise.

The Local Road Research Board (LRRB) funded a research project to determine effective methods for stabilizing damaged roadway slopes. These methods would be incorporated in a guide that local engineers could use to identify the type of slope failure and then select an appropriate repair method.

Investigators began by surveying Minnesota county engineering departments to identify sites that needed to be stabilized. Local engineers also provided details about both successful and unsuccessful stabilization methods that have been tried in the past. The re-search team inspected 14 destabilized sites identified in this effort and took soil samples from each site.

Then they conducted a literature review of slope stabilization methods, identifying 12 stabilization techniques. Based on this review, researchers tested the soil samples with direct shear tests to identify shear strength parameters such as effective friction angle and cohesion. They ran soil classification tests to measure plasticity, granularity and gradation, and moisture content. These properties were then used as inputs in slope modeling and parametric studies to examine viable repair techniques for each site.

Investigators summarized their analysis of each case and documented stabilization methods that would meet the needs identified in the case studies. Finally, the research team prepared a slope stabilization guide that local engineers could use in the field to identify the type of slope failure and the appropriate solution.

Five of the destabilized sites featured primarily sandy soil, eight had fine-grained soil, and one was rocky. Slope failure was visible at nine of the sites. Groundwater management figured prominently in most sites and repairs.

Investigators identified eight slope failure mechanisms that encompassed the full range of destabilization scenarios presented in the case studies. Each method had been identified in survey responses as a technique used successfully at the local level. The site conditions that contributed to the failure were identified along with a repair solution for each failure type.

Using the findings from this project, researchers created a slope stabilization guide for Minnesota local government engineers. This field guide describes common slope failures and conditions that may contribute to each. It includes a simple, three-step flowchart that guides engineers to the appropriate repair technique by determining whether the damage is a creep or rotational failure, whether the soil is cohesive or granular, and if there are groundwater concerns.

Based on engineers’ answers, the flowchart directs them to one or more of the eight slope stabilization techniques, providing photographs and repair methods that have been successful in addressing slope problems along Minnesota roadways.

The Slope Stabilization Guide for Minnesota Local Government Engineers will be sent to each of the 87 county engineering departments. Local engineers can keep the guide on hand when they investigate slope failures along their roadways, and with it quickly identify what work needs to be done to repair the damage.