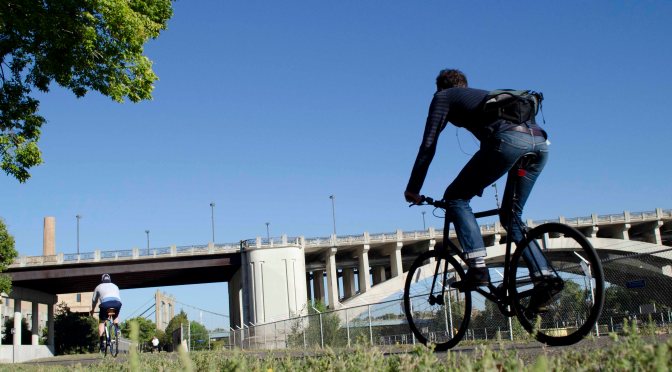 This blog post by University of Minnesota Professor Greg Lindsey was originally posted on the CTS Conversations blog.

April 9 is national Bike to Work Day, a day to celebrate those who choose bicycling as their principal mode of transportation for commuting, and a time to encourage more people to consider this healthy, efficient transportation option. Minnesota has much to celebrate in terms of bicycle commuting. Bike-Walk Twin Cities and Transit for Livable Communities are wrapping up the National Non-Motorized Pilot Program, a federally funded program to demonstrate the potential to increase biking and walking through focused investment in infrastructure and other interventions. Bicycle commuting rates in Minneapolis have climbed to 4.5%, and Minneapolis now ranks 20th in the nation in bicycle commute share. This is a noteworthy achievement, especially considering our notorious winter weather. These achievements, along with others such as the success of Nice Ride, our pioneering bike share program, have contributed to Minneapolis being named America’s most bike-friendly city by Bicycling Magazine. Celebration of these achievements – which represent hard work by hundreds of individuals and thousands of commuters – certainly is warranted.

But we only need look across municipal boundaries to know we had better put more energy into encouraging bicycling than into celebration. Bicycle commute rates in St. Paul remain below 2% less than half the Minneapolis rate, and rates in most suburban, exurban, and rural communities remain even lower. And the story remains essentially the same for all types of bicycle trips. Jessi Schoner, a doctoral candidate in the Department of Civil Engineering, is analyzing non-motorized mode shares for all trips recorded the Metropolitan Council’s recent Travel Behavior Inventory. Her analyses show that bicycling remains an urban phenomenon, with the share of all trips taken by bicycling highest in Minneapolis, followed by St. Paul, and then suburban and outlying communities. Why is this so? Better infrastructure no doubt is part of the reason, but there likely are other reasons, including housing patterns, access to employment, socio-demographic factors, and culture. Additional research is needed.

But this leads to additional reasons to be optimistic this Bike to Work Day: the commitments made by the Minnesota Department of Transportation (MnDOT) to foster multi-modal transportation systems and the agency’s investments in research to increase understanding of bicycle traffic patterns. In 2013, as part of the Minnesota Bicycle and Pedestrian Counting Initiative, MnDOT funded the installation of the state’s first two automated, continuous in-street bicycle counters. These counters, which monitor bicycle traffic around the clock, 365 days per year, will provide new insights into the bicycle traffic volumes and their daily and seasonal patterns. While bicycle traffic monitoring in Minnesota is only in its infancy, it represents progress towards establishing the evidence base we need to determine how to make bicycling safer and to invest in bicycle infrastructure.

And so celebrate this Bike to Work Day and thank your fellow Minnesotans for all they have accomplished. But also take time to reflect on the work that needs to be done to improve opportunities for cycling throughout the state, for we have miles to go.

Greg Lindsey is a professor at the University of Minnesota Humphrey School of Public Affairs. His areas of specialty include environmental planning, policy, and management. His current research involves studies of the relationship between the built environment and physical activity, specifically factors that affect the use of pedestrian and cycling infrastructure. Lindsey presented some of his bicycle and pedestrian data collection research at the 2014 Minnesota Transportation Conference held March 4-6.

One thought on “Bike to Work Day: progress in Minnesota, but miles to go”