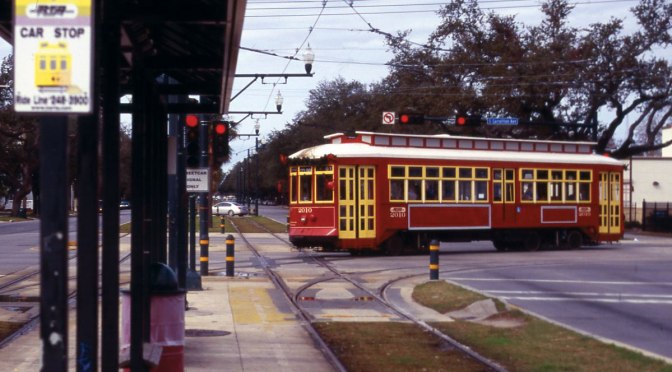 New streetcar lines are in the planning stages in Minneapolis and St. Paul. Proponents cite not only the lines’ ability to strengthen the transit system, but also their potential as catalysts for development. Estimating the impacts of streetcars is challenging, however, as most U.S. lines operate in downtown areas with many interrelated factors at play. A recent U of M research project examined the issue through the prism of one city’s experience: post-Katrina New Orleans.

The team—research fellow Andrew Guthrie and Assistant Professor Yingling Fan of the Humphrey School of Public Affairs—analyzed building permits near streetcar stops in the downtown business district and in several urban neighborhoods.

The researchers estimated how the frequency of commercial and residential permits changed with distance from streetcar stops, controlling for hurricane damage, proximity to existing commercial areas, and pre-Katrina demographics.

They found that throughout the system, building permits strongly reflect the distance to stops—and that commercial and residential permits move  in opposite directions within the first 750 feet.

Based on their results, Guthrie and Fan conclude that traditional streetcar lines can help increase commercial development not just in downtown business districts, but in other urban areas as well. The findings also indicate that streetcars  shape development in urban neighborhoods in  a fundamentally different fashion than light rail.

Read the full article in the January issue of Catalyst.