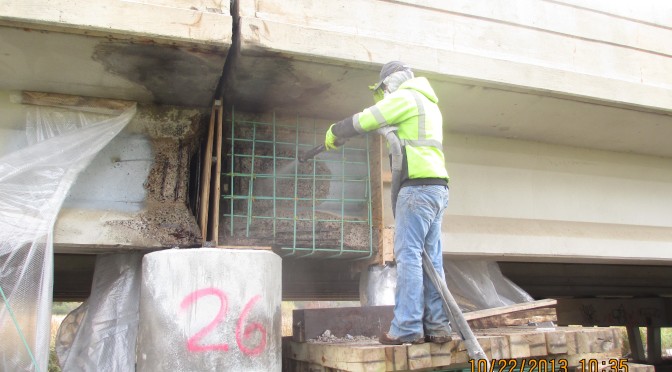 By load testing part of a bridge that was removed over Nine Mile Creek, researchers have proven that an innovative and cost-effective method for repairing damaged bridge girders restores them to their original strength.

The findings will help MnDOT and other transportation agencies avoid lengthy traffic closures and more costly techniques when repairing other bridges.

The salting of bridge and roadways during Minnesota winters can create highly corrosive conditions that damage bridges. Such was the case with the Highway 169 Nine Mile Creek Bridge near Edina and Minnetonka, where leaking expansion joints caused corrosion to elements responsible for the strength of bridge girders: shear reinforcement, prestressing strands, and the surrounding concrete.

During a 2013 repair, crews encountered two locations of severe beam deterioration. To repair these areas, MnDOT used a novel method developed in Michigan that involved removing deteriorated concrete and cleaning the area, placing steel reinforcement cages around the damaged beam ends and then encasing the beam ends with concrete. The repair concrete was a specific form of concrete placement called “shotcrete”—a mix of sand, aggregate and cement that is applied with a hose that is wetted at the nozzle before the mixture is sprayed at high velocity onto the repair surface. When the desired thickness of the concrete placement is reached, the placement is troweled and shaped to finish to the desired cross section. The beam end repairs were made in October 2013 and allowed the bridge to continue its function to the public.

MnDOT was able to make the repairs without traffic interruption.

Several years later, the bridge was scheduled for replacement. The repaired girder ends appeared to be in good condition, but the repair technique had not been studied for strength. The bridge replacement presented MnDOT with an excellent opportunity to evaluate the repair method for use on other damaged girder ends.

When the southbound lanes of the bridge were taken out of service in spring 2017, four prestressed girders were removed from the structure and brought to the University of Minnesota’s Theodore V. Galambos Structural Engineering Laboratory for testing.

Researchers examined and tested the beams to evaluate the effectiveness of the reinforced shotcrete repair method.

All repairs had been done in field conditions that have the potential to adversely affect the results. But when the beams broke in the lab, the shotcrete repair did not separate from the bonding surface. The repaired reinforced concrete beam ends were found to be at least as strong as similar beams that were in good condition and had not needed repair. The initial repair methods and subsequent testing of the prestressed beam ends are demonstrated in a video created by the research team (testing starts at 3:30 min).

Using this method, severely deteriorated beam ends can be repaired with reinforcement cages and shotcrete for $5,000 to $10,000. The alternative to this type of repair involves constructing a new beam, closing traffic, removing the bridge deck over the damaged beam as well as the beam itself, and recasting the bridge deck and barrier—an intrusive replacement that costs hundreds of thousands of dollars and more than a month of bridge lane closures.

Results have been presented internally at MnDOT, at state and Midwest conferences in late 2017, and at the National Bridge Preservation Partnership Conference in April 2018. Presentations have impressed transportation engineers from around the country and have increased confidence in dealing with aging infrastructure. MnDOT will continue to refine repair methods with the shotcrete treatment based on best industry practices, and will continue to use the beam end repair method if similar conditions are encountered in the state.

This post pertains to Report 2018-07, “BR27568—Experimental Shear Capacity Comparison Between Repaired and Unrepaired Girder Ends,” published February 2018. More information can be found on the project page. (Part of this article was adapted from an October 2017 article by the Center for Transportation Studies. This project was featured in a KSTP-TV news story.)