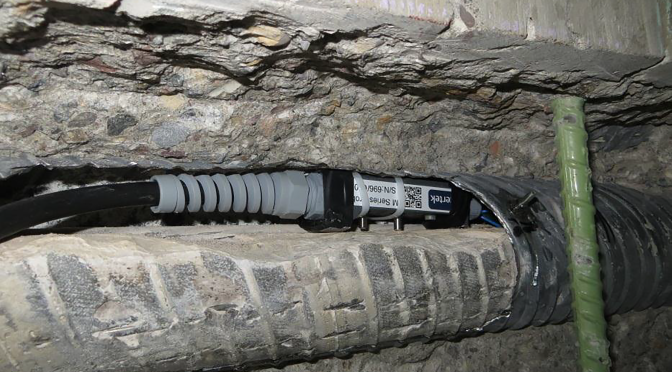 Researchers provided recommendations and general guidance to assist MnDOT in developing cost-effective strategies for future investigation and repair contracts of post-tensioned bridges built in Minnesota before 2003. To develop these recommendations, researchers identified grout voids in post-tensioning ducts on two representative bridges, documented strand corrosion and repaired voids by filling them with grout.

“With the guidelines developed in this project, we have a good basis for cost-effectively and efficiently inspecting post-tensioned bridges built before 2003,” said Dustin Thomas, South Region Bridge Construction Engineer, MnDOT Bridge Office.

“From a fiscal perspective, it makes sense to do limited inspections on these bridges before committing additional resources to more comprehensive inspection and repair,” said Mark Chauvin, Associate Principal and Unit Manager at Wiss, Janney, Elstner Associates, Inc.

Some concrete bridges in the United States are strengthened using post-tensioning—a method of reinforcing concrete by running steel strands through a hollow plastic or metal duct placed within the concrete element. Tension is then applied to these strands with a hydraulic jack, com-pressing the concrete and creating internal stresses that resist external traffic loads. Post-tensioning improves the durability of concrete and virtually eliminates cracking.

Post-tensioning ducts are filled with grout—a mixture of cement, sand and water that hardens around the steel strands. This practice prevents the strands from corroding if they are exposed to air, water and deicing chemicals.

Grouting materials used in bridges built before 2003 frequently produced voids where grout did not fully fill the post-tensioning ducts or cover the strands. These post-tensioning strands were vulnerable to corrosion, which can lead to deterioration in bridge elements over time. Once transportation agencies and the industry became aware of these issues, they improved their construction practices and began using prepackaged grout materials with additives so that the post-tensioning ducts would be completely filled.

About 40 post-tensioned bridges were built in Minnesota before 2003 that might still require repair. MnDOT commissioned a two-phase project to develop techniques for evaluating these structures. In the first phase of the project, completed in 2012, researchers inspected a representative sample of these bridges and developed a general inspection protocol to guide future investigations. In the second phase, described here, researchers developed additional guidance about grout repairs, as well as the most cost-effective contracting methods for such repairs.

The goal of the second phase of this project was to provide recommendations and general guidance that MnDOT could use to develop cost-effective strategies for future investigation and repair of post-tensioned bridges built in Minnesota before 2003. As part of this project, researchers identified grout voids in post-tensioning ducts on two representative bridges, documented strand corrosion and repaired voids by filling them with grout.

Using their experience with these repairs, researchers then created guidelines that would help MnDOT develop cost-effective strategies that can be implemented in future post-tensioning duct investigation and repair contracts.

Researchers found voids in 32 percent of inspected ducts. These voids were typically at least 10 feet long and about one-half the diameter of the duct. Although prestressing steel strands were exposed at approximately half of the grout voids, no significant corrosion of the strands was observed at any location. Light to moderate corrosion was usually observed on the inside surfaces of the galvanized metal ducts at grout voids.

The guidelines developed by researchers address:

The guidelines developed in this project will provide MnDOT with a framework to solicit and procure similar engineering and construction services contracts for post-tensioning bridges in Minnesota. Researchers recommend exploring additional techniques to more rapidly assess and inspect post-tensioned bridges, including noninvasive investigative methods that do not require drilling holes.

This post pertains to Report 2017-04, “Considerations for Development of Inspection and Remedial Grouting Contracts for Post-tensioned Bridges,” published January 2017.