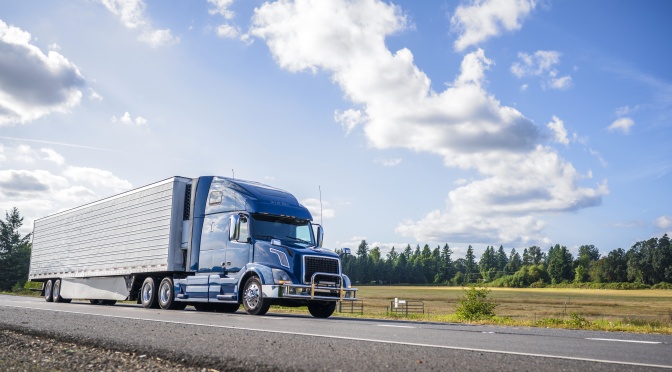 This article was originally published in Catalyst, May 2022.

In Minnesota, trucking produces about 13 percent of the total pollutants in the state. Moreover, a 2019 EPA report identified the transportation sector as the source of the highest share of greenhouse gas emissions in the United States, a problem compounded by the fact that this pollution is more concentrated in urban areas.

Electric trucks hold great promise as the trucking industry increasingly looks for more sustainable options. But what will it take to get them into service?

Alireza Khani, associate professor in the Department of Civil, Environmental, and Geo- Engineering at the University of Minnesota, researched that question for the Minnesota Freight Advisory Committee (MFAC), focusing especially on the benefits that electric trucks offer.

“Electric freight vehicles (EFVs) offer numerous benefits to Minnesotans, including less emissions and cleaner air, and they are part of a comprehensive strategy to reduce carbon pollution,” Khani says. “Because EFVs emit zero tailpipe emissions, they are cleaner to operate compared to diesel trucks. Charging EFVs with clean energy makes them even cleaner.”

According to Khani, other benefits of EFVs include lower maintenance and fuel costs, no vehicle noise, and higher operating efficiency. As a result, the operational and environmental benefits of EFVs often lead to additional advantages, such as longer hours of operation, greater access to zones restricted to zero- or low-emission vehicles, and free parking.

Khani also found some of the biggest barriers to the use of EFVs involve infrastructure and cost. EFVs require an infrastructure that includes readily available charging stations and easily accessible maintenance options. They also have limited driving range, which is exacerbated by lack of charging infrastructure and the negative effect of cold weather conditions on battery charges.

In addition, EFV charging time frequently cuts into on-the-road time, and, to better accommodate EFVs, utilities would need to increase their capacity.

The initial cost for an electric truck runs about $86,000 higher than a diesel truck, with additional costs for battery replacement every three to seven years. That initial cost, however, eventually turns into savings because the operating costs of EFVs average 13 percent less than diesel trucks.

“Although there is a higher initial cost, in the long run, this could lead to much bigger savings and potentially higher revenue because of the operational advantages,” Khani says.

Cost and energy incentives, preferred route incentives, and an extended operation time window also could help offset barriers. But a combination of financial subsidies and government policy promoting the implementation of EFVs will be critical to success, he says. Essentially, this means trucking companies, which will have to invest big money in the electrification of their fleets, need to be assured that they can recoup these costs.

Khani is especially encouraged by the passage last fall of the bipartisan Infrastructure Investment and Jobs Act, the single largest infrastructure investment in American history. The law includes significant funding at the federal and state levels for electric vehicles and the infrastructure needed to support their deployment.

“Proper policies and incentives, along with fast building of infrastructure, are the keys to massive and successful adoption of electric freight vehicles,” Khani says.

An MFAC white paper by Khani and graduate research assistant Behnam Davazdah Emami on the benefits and barriers to freight electrification is available on the MFAC website.