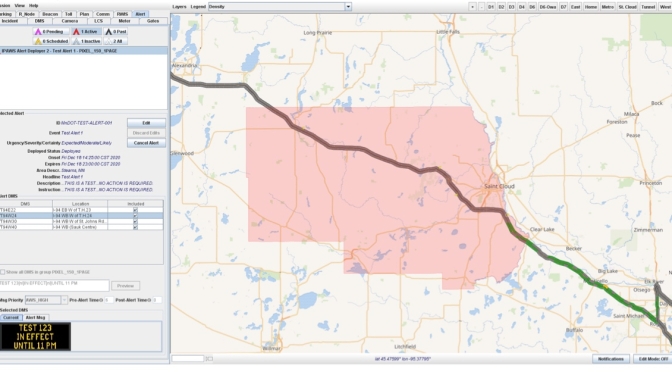 MnDOT maintains nearly 400 dynamic message signs (DMS) along Minnesota highways that display real-time information to warn motorists of roadway incidents, construction or congestion ahead that could pose a hazard or cause delay. DMS use to convey weather alerts has been limited to blizzards and other very isolated winter conditions. MnDOT has been concerned about the timeliness of weather messages and the chance that such messages could be overused, possibly leading motorists to take them less seriously.

Messages on DMS are posted by staff via computer within the Regional Transportation Management Center (RTMC). MnDOT wanted to investigate whether DMS weather alerts could be automatically generated through specific National Weather Service reports and other sources rather than being posted manually. This would greatly increase the timeliness and accuracy of these weather messages. The agency also wanted to examine other state transportation agencies’ best practices regarding DMS, as well as motorists’ perceptions about the messages they see.

The project’s goal was to automate blizzard and other selected National Weather Service winter weather alerts on appropriate DMS along Minnesota highways. Supporting objectives included investigation of other state agencies’ DMS best practices and assessment of the public’s perception of DMS blizzard warnings to better meet motorists’ needs and expectations.

Twenty-one state agencies responded to the survey addressing their use of DMS for weather alerts. Agencies provided information about how they posted DMS, the kinds of weather alerts they posted and the vendors that agencies used if their systems were all or partially automated. More than half of agencies posted DMS messages manually, while seven used a hybrid system that included automation. The five most frequent weather alerts were winter storms, high winds, dense fog, freezing rain and blizzards. Agencies contracted with a wide range of vendors for DMS automation.

A public perception survey of Minnesota motorists’ perceptions of DMS messages garnered 406 responses representing diverse groups from the Twin Cities metropolitan area, Greater Minnesota and nearby states. More than half had seen a blizzard warning on DMS and reported seeing it two to three times. Three-quarters of those who were not aware of the blizzard before they had set out found the messages helpful or very helpful. Half of those who already knew about the blizzard also reported that the messages were helpful or very helpful. All respondents who had seen the DMS blizzard alerts while driving found them to be more effective than other media weather alerts. The DMS blizzard alerts resulted in more than half of motorists driving with extra caution and about one-quarter of them returning home. The survey clearly showed that motorists pay attention to DMS blizzard warnings and most alter their behavior in response.

What Was the Result?

The survey results supported MnDOT’s decision to engage a consultant to develop a software interface system that would allow RTMC staff to automate some DMS winter warnings. This software was a new module to MnDOT’s existing Intelligent Roadway Information System (IRIS), which is used to control MnDOT field devices, including DMS.

The consultant created a decision support and workflow tool within IRIS called the Road Weather Message System (RWMS) that acquired National Weather Service Common Alerting Protocol (CAP) messages from a national alert reporting source. The CAP messages contain weather event data, including type, location, duration and severity. The RWMS generates a text message describing the alert and selects roadside DMS best located to convey the message. Staff can choose to allow the system to automatically display the message or require an operator to review it first.

In early January 2021, just in time for a winter storm, the RWMS was installed and used for the first time, and it functioned as expected. Thus far, engineers at RTMC intend to use the automated DMS system only for alert messages about blizzards and snow squalls.

RTMC staff will continue to examine the effectiveness and benefits of the automated DMS message system. Additional DMS alerts for winter driving hazards such as freezing rain or fog may be considered for automation. Additionally, a new project is planned to examine motorists’ driving behavior before and after a DMS message appears on the roadway.